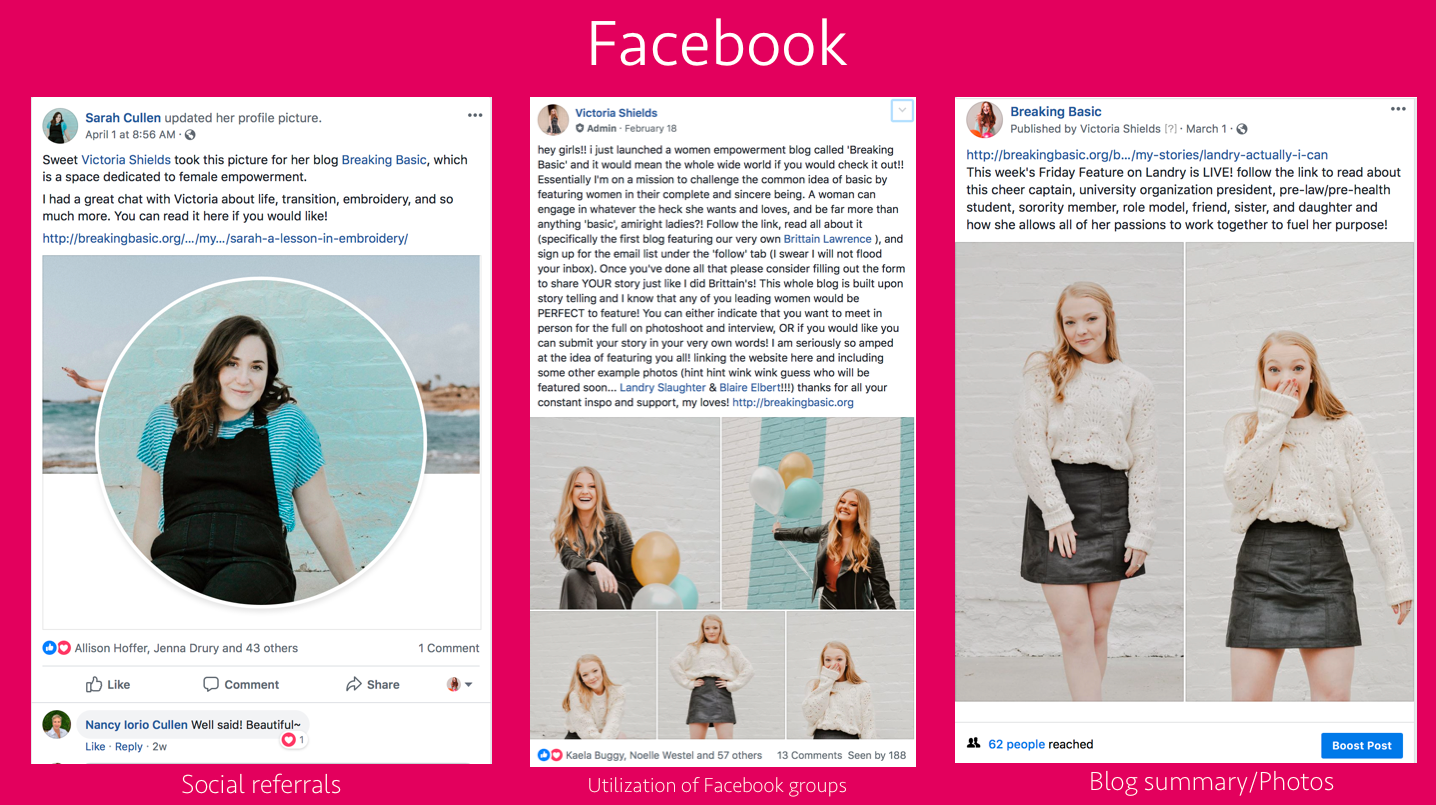 Victoria Shields was a student in my Spring 2019 Social Media Marketing class at Belmont University. You can read her testimonial about the class here.  Below is information from Victoria’s Final Report that outlines here success with her topic on Facebook groups.

“The internal strengths of my campaign had greatly to do with the nature of the topic I chose. I chose a topic that I felt like I was already recognized as a thought leader in: women empowerment. As a Theology major I have done intense research on feminist theology, and as an engaged sorority member I have experienced the content I would be talking about first hand, and have also been able to make connections with other women’s experiences in empowerment. I have a passion for this topic, it was something I wanted to write about and something people already knew I had some fair credibility in. I had already made great connections to women on the topic of healthy empowerment, as I had already been active in writing about it on my personal Instagram, so I had loyal followers follow me to a second more centralized platform. The way in which I chose to create content (interviewing/photographing women around me) helped me to maintain my brand story, for I was forced to be loyal to my brand promises, “noticing, listening, and sharing,” in a mission as fragile as sharing someone’s heart with the world. Furthermore, I enjoyed doing this! I didn’t feel like I was struggling to come up with content, so the enjoyment I had maintained consistent brand which really drew people in and kept them there. I’ll touch on this more in my external opportunities, but I think much of my success had to do with social referrals. Because I was writing about real fellow women, they wanted to share my work with their friends and family, who wanted to further share the work. When a woman would change her profile picture to a photo I took of her for the campaign she would tag me and link the blog. I think this took up the bulk of much of my internal successes.

I found that Facebook was where I had the most social referrals, which explains why I had such a high brand acquisition for this medium. The girls I was writing about would post the photos I took of them and link the blog in their caption. As you can see from one of the examples of my social referrals, a comment from a relative indicated that she was successfully funneled to the website and read the blog. The nature of my Friday Feature stories combined with the common usage of Facebook as a medium to share articles and connect with friends and family was key in my Facebook success. I was also intentional about using Facebook groups to gain users. The example I have included here is when I first launched the blog. I had written stories on two women from the same sorority, and therefore I chose to post about the blog in that sorority’s Facebook group. Using women these girls would know and be excited to read about made a big difference. When I posted I also included a few action calls like subscribing and singing up to be featured like the girls serving as an example. This post was seen by 188 people on the first day I launched the blog, which immediately put brand awareness in a great spot. Finally, I provided quick and easy summaries of the posts I was sharing as well as a few photos for a good hook. I think that these three specific strategies I took to Facebook are the best explanation of my Facebook acquistion successes.

Facebook ended up being my social media channel with the highest acquisition. The number of users via Facebook had more comparative spikes than Instagram. As I was posting daily on Instagram, I would rake in a few users daily. However, Facebook raked in a much larger bulk of users on particular days when I would post. I have gone through to analyze the noticeable spikes in users via Facebook and noted that the two spikes took place on days that I utilized Facebook groups. Furthermore, my highest spike on Facebook in April was also the day where I received the most Facebook referrals. Comparing these two bits of data reveals to me that Facebook is a stronger medium for Brand Awareness, as Facebook groups and social referrals allow one to gain a larger reach beyond those who have liked and subscribed to the page. Likewise, I suspect Instagram is a better medium for Brand Retention/Loyalty, for it is much harder to reach those who are not following the Instagram profile, yet there were still consistent interactions with the website every day.

I credit most of my success to my attention to detail and commitment to content creation. Paying close attention to the data from Google Analytics was huge in how I would adjust the way I was using each social media platform. I realized that Instagram was the best tool for brand attention due to the ’follow’ nature of the platform, and Facebook for brand awareness due to the ‘share’ nature of the platform. I realized that Instagram would slowly trickle in users if I posted on both stories and the main feed as often as possible, and I learned that Facebook would be most effective when utilizing features like Facebook groups and adding a hyperlink to nearly every post. Pay attention to what your analytics are telling you and adjust accordingly. Run A/B tests like I did to find a grove in email. Ask followers what they want to see! Be able to step out of your comfort zone depending on what your followers and stats are communicating with you. And finally, love what you are doing. You will not burn out if you are passionate and committed to learning as you teach. The most dedicated content will spew from you easily when you are committed to the why behind it all.”

If you are a college professor and are just becoming familiar with what we do at The Social Media Magnet, check our professor overview with highlights of our features and benefits.  If you are interested in considering The Social Media Magnet for your university, we have a professor preview function that will allow you to see and work with some of the content.  If you are already in preview, which many of you are, and you are ready to commit to using our curriculum in your next semester’s class, then fill out our Commitment Form to get on-boarded and prepped for your next class.  Or if you just have some general questions, feel free to contact us.  We would love to assist you however possible.